When I was in high school, more than three decades ago, music was my thing, especially heavy metal. Living in Brooklyn, NY, going to Lamour’s nightclub, was a weekly ritual for my friends and me. By 1981, the club was transitioning from a 70’s discotheque to a rock and roll concert hall. Many tribute bands played Lamour’s but every few months the band Twisted Sister would play at the venue and it was always an iconic night. My friends and I would don our Twisted Sister tee shirts and have our SMF (Sick Mother F..ker) fan club membership cards in hand and off to the show we’d go.

One particular night, the now legendary lead singer of the band, Dee Snider, stopped the show, ran outside and literally ripped 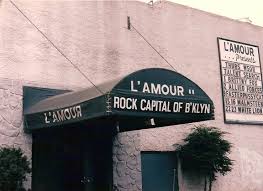 the Disco sign right off the canopy. We all poured onto the street and cheered him on like the rebellious teens that we were. But something more was going on. Twisted Sister was getting ready to make their indelible mark on rock and roll.

I clearly remember at another Twisted Sister show at Lamours, Dee announced from the stage that the band is going England to get a record contract because the record companies in the States wouldn’t give them the time of day, let alone a record deal. As Dee spoke those words I laughed to myself and thought, shut up and just play another song. What I didn’t realized as a naïve teenager is that Dee and the boys were calling upon the law of attraction and speaking a dream into reality, whether they knew it or not.

Last Thursday night, I had the honor and pleasure of talking with Dee Snider after he headlined the Rocktopia show. I 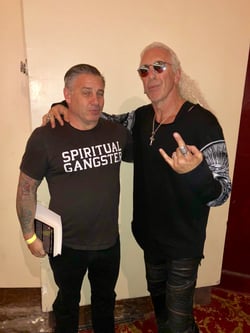 remembered that night thirty-something years ago and realized, HE DID IT! Not only is Dee and Twisted Sister a hugely successful rock and roll band, they are now icons in the music industry. We talk about how they did it.

Because Twister Sister are local boys from here in the Big Apple, I feel a kinship with them. I watched them rise and make an unforgettable impact on music and then ascend to rock and roll icon status. I feel as though I got to witness the transformation up close and am now able to say, “I knew them when.”

The leader of the organization reflected on the past four decades and lessons he learned. It was incredible to listen to Dee. Whether you’re talking about a rock band, business or a marriage, it takes hard work. (Dee’s been married to Suzette since 1981, rare in rock and roll and show business). It’s all about grit, determination, persistence and knowing what you want your results to be in the end. Dee himself knew he needed to be on stage and be a star. He didn’t let all the voices in his head talk him out if it. It wasn’t rational. How could this skinny guy from Long Island make it big in one of the toughest industries in the world? “Hard work” is what Dee says. “Being creative and not giving up.” It sounds cliché, and it is if you heard it before yet don’t heed the sage advice. The self-help, motivational speaker, Tony Robbins, says simply: take massive action. Do the unthinkable. Fortune favors the bold.

One of my favorite quotes of all time, from another Brooklyn boy, Mike Tyson is, “Everyone has a plan until they get punched in the face.” I think Mike was talking about literally getting punched however, in business and life, we get punched all the time. It comes in the form of a setback. When Twisted Sister couldn’t get a record deal in the United States, they could have given up on their dream and continued to play clubs for the rest of their careers. But they didn’t. They went the extra mile (3470 miles) to London and took bold action to get a record contract. In life, when you get punched you have two choices: either make an excuse or make a way. The punch can be a great excuse to stop or it could be just a redirection to your dream. Hey, if it was easy, everyone would do it!