When I was 10-years old, all my friends wanted to play for The New York Yankees. Not me. I wanted to be a Hells Angel. 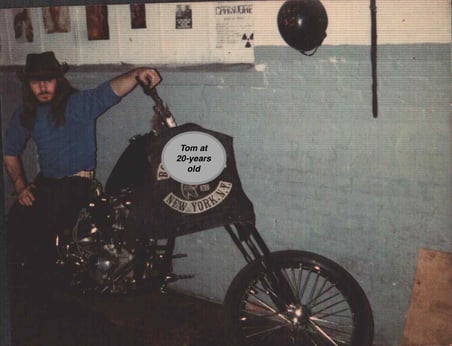 When I was growing up in Brooklyn, NY, there was a guy in the neighborhood who had long hair and tattoos and drove a big, loud Harley Davidson motorcycle. His HOG was not one purchased from the dealership's showroom. It was a 'custom-built chopper' with a long, chrome front end and high handlebars. We called him Mike the Bike.

When he came down the block, everyone knew it. People stared. Lots of the adults made comments, especially my police officer father. In my 10-year old mind, having that biker look was a great (easy) way to get attention. When I turned 17-years old, I bought my first motorcycle—a 1969 Triumph Bonneville. When I was 19, I built a Harley Chopper, just like Mike the Bike's machine. I submerged myself in the motorcycle subculture in New York City and met some real-deal bikers. Not ones who were weekend warriors and were trying to buy back the machismo they traded in for college degrees. The guys I met treated the biker lifestyle as a religion. Who else would get a motorcycle logo tattooed into their skin? One thing leads to another, and I ended up getting inducted into a motorcycle club. The Hells Angels later absorbed that gang. I got out with my life before that happened.

Thirty years later, in retrospect, I learned many things from that experience. Some lessons are:

Check out the piece here:

At the age of 19, I found myself involved in one of the most notorious outlaw motorcycles gangs in New York City. In retrospect, it was simultaneously one of the best and worst decisions of my life. While being involved in the gang, I didn’t realize I was learning valuable lessons that I’d be able to apply years later in my businesses. It’s safe to say that if I didn’t go through that phase in my life, I wouldn’t have the business instinct that I have today.